Shim-pack XR Series columns use a 2.2 μm packing particle size and offer a skillful balance between resolution efficiency and pressure. An XR Series column resolution equivalent to a general-purpose column with 5 μm packing particle size (Shimpack VP-ODS), but significantly reduces the analysis time. The pressure on the column under many analysis conditions does not exceed 35 MPa. Consequently, ultrafast analysis can be comfortably performed on an existing instrument. 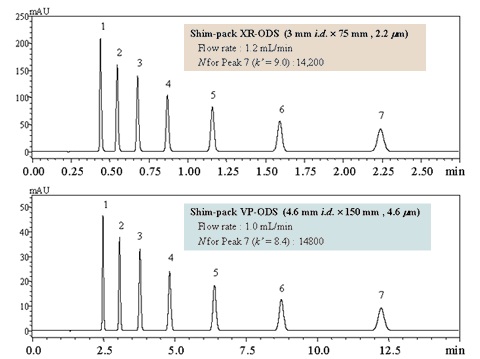 The column was switched from Shim-pack XR-ODS to Shim-pack XR-Phenyl to improve the resolution. The difference in retention properties between the ODS group and the phenylpropyl group improves the peak shape, controls the resolution, and further reduces the analysis time.

While the Shim-pack XR-ODSII/III use the same 2.2 μm packing particle size as the Shim-pack XR Series columns, they have higher 60/100 MPa pressure tolerance to achieve high-resolution fast analysis in a long column using a water/methanol mobile phase. This column significantly extends the range of applications of high-resolution fast analysis to include analysis near room temperature.
The Shim-pack XR-ODSII/III columns are ideal for the Nexera UHPLC or Prominence UFLC. This combination achieves both faster speed and higher resolution.

The Shim-pack XR-ODSII range includes a 1.5 mmI.D. model in addition to normal 2 mm and 3 mmI.D. columns. With an optimal flow rate of 0.2 to 0.3 mL/min, the 1.5 mmI.D. column offers the optimal flow rate for LC/MS and reduces mobile phase consumption. The pressure resistance of Shim-pack XR-ODSIII has been increased to 100 MPa, so when a 200 mm-long column is used, both faster speed and higher resolution can be achieved.

The Shim-pack XR-ODSIII with an increased pressure tolerance of 100 MPa can be used for a wider range of applications while maintaining the ease of use of the Shim-pack XR-ODSII. By combining Shim-pack XR-ODSII /III with Prominence UFLC or Nexera, high-resolution and high-sensitivity detection of minute components can be achieved in impurity analysis, etc.

Application to evaluation of minute impurities in cefazolin

Application to evaluation of minute impurities in cefazolin

Analysis of food additives with a mobile phase containing methanol

Analysis of food additives with a mobile phase containing methanol

*1: Restricted partially
* Appearance and specifications are subject to change without notice.