The Nexis GC‒2030 provides powerful support for configuring custom GC systems tailored to user needs. These systems are adjusted and tested at the factory for the given application before shipment, so they are ready to use for measurements as soon as they are delivered. That means no time is required for developing methods after the system arrives. Two TCD detectors and one FID detector can be installed at the same time. An optional valve box can be added to control up to eight valves from the original four. 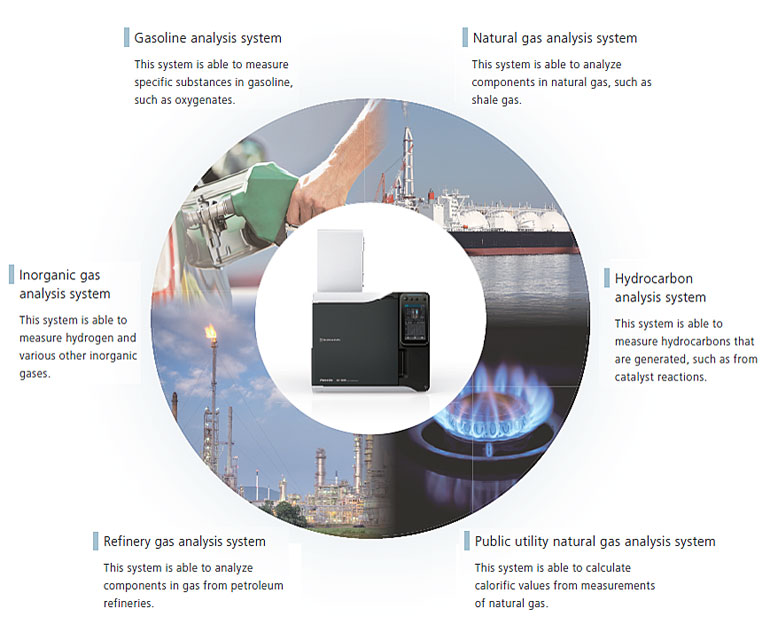 Advanced Flow Technology (AFT) function increases analytical productivity with backflush, detector splitting, and other systems. With the Nexis GC‒2030, methods can be specified either via the LabSolutions GC software or directly via the touch panel on the GC unit, without having to use any tedious specialized wizard software. It supports a variety of carrier gas control modes (such as constant linear velocity, constant flowrate, and constant pressure control modes), which ensures analytical conditions can be transferred smoothly from previous systems. Multiple AFT lines can be connected to the same GC unit as well.

Once target compounds have been detected, the backflush system reverses the carrier gas flow to discharge non‒eluting components in the column through the injection port. This ability shortens analysis times and improves productivity. Multiple chromatograms can be obtained at the same time by using the detector splitting system to split the flow exiting the analytical column and send the eluted components to multiple detectors. Consequently, much more information can be obtained from each analysis, which improves productivity by saving time and reducing costs.

Heart‒cut is a method of performing separation using two columns with different selectivity. In this system, components that could not be separated by the first column are introduced into a second column with different properties, and further separation is performed. Heart‒cut system can achieve high resolution performance analysis, which is normally difficult to attain by single column analysis.

Hydrogen can be a safe and highly effective carrier gas. As a highly efficient carrier gas with a flat Van Deemter curve, it maintains its separation efficiency across a wide linear velocity range. This makes it both a good substitute for Helium and also a great choice for speeding up analysis times. We know safety is paramount, which is why the Nexis GC‒2030 offers an optional built‒in hydrogen sensor*. It not only maintains a safe standby mode for early detection of any potential leaks, but also shuts off hydrogen flow. The main unit also includes an automatic carrier gas leak check function, which is very helpful when using hydrogen as a carrier gas.