A versatile tool for the analysis of polymers, insoluble samples and a broad range of compounds, which cannot be introduced into GC directly.

Pyrolysis gas chromatography mass spectrometry (Py-GCMS) can be used to characterize most materials including insoluble and complex materials at trace levels often without any sample pretreatment e.g. polymers, plastics, rubber, paints, dyes, resins, coatings, cellulose, wood, textiles, oils etc. Due to the direct sample introduction and the chromatographic separation, it is possible not only to analyze very small amounts but also to obtain detailed, unique information, which is unobtainable by other analytical techniques. The Multi-Shot Pyrolyzer EGA/PY 3030D with its vertical micro furnace is the top-class model in the series of multi-function pyrolyzers developed by Frontier Laboratories Ltd.

For EGA analysis a short and narrow (2.5 m, 0.15 mm i.d.) deactivated capillary tube without a stationary phase is used as direct connection between GC-injector and mass-detector. As the sample is temperature programmed over a given temperature range (i.e. 40 - 800 °C) , the evolved gases flow to the detector without chromatographic separation. The result shows the simple thermogram such as a differential thermogravimetric curve for a given sample.

The sample cup free-falls into the preheated pyrolyzer furnace. The sample temperature goes from ambient to the pyrolysis temperature in less than 20 msec. Pyrolysis occurs instantly and the pyrolyzates are introduced into a capillary column for separation without second reaction.

Double Shot analysis provides both: information about volatile compounds e.g. monomers or additives and the polymeric content of the sample. Therefore the sample analysis is divided into two steps:

Step 1: during the thermal desorption step the sample is heated over a temperature range and the volatile compounds evolve from the sample. The evaporated compounds are trapped at the beginning of the GC column and analyzed via GCMS after the temperature program of the pyrolyzer is finished.

Step 2: the residual sample is pyrolyzed at a temperature determined by EGA data. The program facilitates the identification of the polymeric composition of the sample.

In cases where highly complex samples demand a detailed analysis, Heart-cut EGA-GCMS is the most useful technique to determine the composition of the sample. In this technique, the evolved gas analysis (EGA) is used to obtain a thermogram and each temperature zone of interest can be analyzed separately. By heart cutting components evaporated in this interesting temperature zones are selectively introduced to a GC column, temporarily trapped at the beginning of the column and finally analyzed by GCMS. This technique allows a detailed characterization of a polymer as well as target compound analysis in complex matrix, e.g. additive analysis in mineral oil. 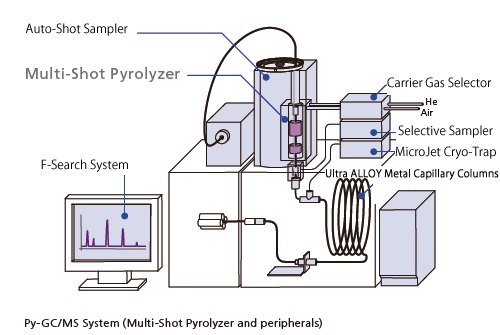