Total organic carbon (TOC) indicates the total amount of carbon from organic material present in a sample. The advantages of TOC analysis are the fast analysis time of a few minutes, the exact and matrix-independent quantification and the very low consumption of chemicals. Since this is a sum parameter, the method is not suitable for identifying individual organic components. TOC is mostly determined in liquids where it serves as a representative index for water quality but can also be measured in solids.

With regard to the solubility of organic substances in water, a distinction can be made between dissolved organic carbon (DOC), which are substances that pass through a filter with a pore size of 0.45µm, and particulate organic carbon. 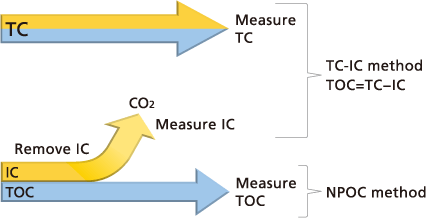 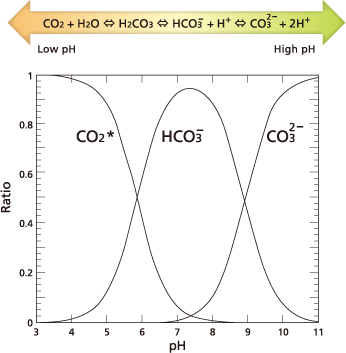 With decreasing pH, the equilibrium moves to the left side of the diagram above. At a pH of 3 or lower, almost all IC becomes dissolved carbon dioxide, which is easy to strip from water.
Based on that principle, IC is measured by acidifying the sample to pH <3 and then measuring the CO2 extracted from the sample by stripping with CO2-free air.

Both the Difference Method (TC-IC) and the Direct Method (TOC = NPOC) are used to measure TOC. However, the optimal method must be selected based on sample characteristics.
The difference method requires two separate analyses and is therefore subject to a larger measurement error than the direct method due to error propagation. As a guideline, the TOC content of the sample must also be greater than the TIC content, otherwise the measurement uncertainty becomes unacceptable for the purpose of the analysis.
For samples that are prone to foaming, or that have significant volatile contents, for example, the TC-IC method is used because the NPOC method can result in loss of purgeable organic carbon (POC) from samples during the stripping step, or in general due to foaming ingredients.

TOC analyzers are, in general terms, CO2 gas analyzers with an upstream oxidation stage and sample preparation system. Regardless of which TOC determination method is used, TOC (also TC) is measured by the oxidation of organic carbon and subsequent quantification of the resulting CO2 using an infrared detector. There are different oxidation methods for conversion to CO2, of which two have become established; combustion oxidation and wet oxidation.

The sample is injected into a high-temperature (650 to 1,200 °C) combustion furnace to incinerate all organic carbon in the sample and measure it as fully oxidized carbon dioxide. Due to the simplicity of using heat/combustion as the principle for oxidation, the method requires no reagents for pretreatment or posttreatment processes. One of the main features of this method is its ability to efficiently oxidize organic carbon matter that is otherwise resistant to decomposition, such as particulate matter or macromolecular organic substances. In the past, high temperatures (1000°C and more) were required because the first TOC instruments used peak height for integration. There, the conversion to CO2 had to be extremely fast so that the signal was recorded as sharp as possible to achieve the best possible resolution.
Very high combustion temperatures lead to the formation of salt melts in the analyzer, which in turn cause increased maintenance due to deactivation of the catalyst, corrosion of the combustion tube and the detector cell. Salt interference on the detector cell from the molten salt products can affect the quality and accuracy of the data. In addition, maintenance time is extended due to the longer cooling and reheating time required because of the higher combustion temperature.
Shimadzu has developed the high-temperature catalytic oxidation (HTCO) at 680°C. While the platinum catalyst ensures complete conversion of all carbon components, the combustion temperature is below the melting points of common salts. Thus, problems caused by salt are minimized while excellent recovery rates are achieved for all organic components. TOC combustion oxidation can easily be expanded to include the determination of an additional sum parameter for nitrogen, Total bound Nitrogen (TNb). 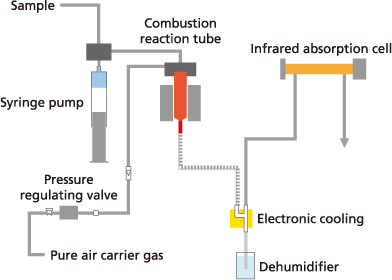 With this method, an oxidizing agent is added to samples to chemically decompose carbon in organic matter for measurement as carbon dioxide. Though heat (up to 100 °C) or ultraviolet irradiation can be applied to promote the oxidation reaction, the ability of the chemical reaction to oxidatively decompose matter is weaker than combustive oxidation, which tends to result in lower carbon recovery rates from suspended or other particulate organic matter, or persistent substances. It does however allow the injection of comparably larger amounts of sample to reach lower limits of detection.

Back to TOC Product Lineup