GC pioneers of the first hour

Since its commercial introduction, gas chromatography has evolved into an important analytical technology. Today tens of thousands of GC systems are in use in all areas of industrial and pharmaceutical development, basic research as well as in quality control. The separation of complex mixtures as well as identification and quantification of the individual components is still considered to be one of the most important tasks in instrumental analysis.

Since 1956: Shimadzu at the early forefront of development

The practical implementation of the first gas chromatograph for the separation of complex mixtures via partition chromatography is generally attributed to the British scientists A.J. Martin and A.T. James, and Martin was awarded the Nobel Prize in 1952 for this. Shortly after, Shimadzu embarked on this technology and in 1956 developed  the first gas chromatograph in Japan , which led to series production of the GC-1A in 1957. At 120 kg, it was a giant compared to today’s much smaller, more powerful and more versatile instruments. With this development, Shimadzu pushed forward the legacy of the founding family of Genzo Shimadzu Junior, one of the ten most important inventors of Japan honored by the emperor at the time.

A review of 60 years innovations in Shimadzu´s GC development 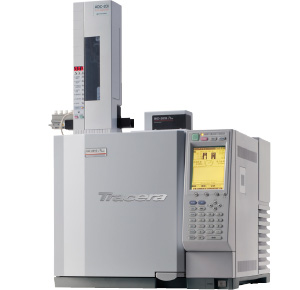 Heart of the Tracera is the Barrier Ionization Discharge Detector (BID). Using new innovative technology a helium plasma is generated inside the BID. Except for helium and neon all kinds of components are ionized by the light emitted from the helium plasma and are measured on special ‘kovar alloy’ collection electrodes. The result of these innovative technologies is a detector capable for ultra trace analysis in combination with unsurpassed long-term stability.

As a worldwide active company, Shimadzu is aware of his responsibility towards environment. Therefore, the economical operation is the design concept for GC-2025. Beside significant reduction in consumption of gases and electric power the GC has a quiet operation noise level and requires only little bench space.  It was the first GC fully consisting of RoHs compliant and recyclable materials. 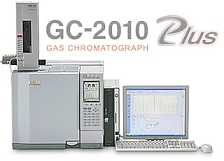 GC-2010 Plus Even excellence can be better

Further reduction of the detector noise level has been achieved by new electronics. This way sensitivity excellence of GC-2010 was further improved. Advanced diagnostic functionality and the new Advanced Flow Technology support the easy operation of the GC-2010 Plus also with challenging applications. Faster oven cooling allows an increase in efficiency due to shorter delay between the GC runs.

The robust system for routine analysis proves his value by extensive support of all GC column types. New developed pneumatics and flexible detectors allow precise working with all types of packed and capillary columns. The low footprint, several automation features and metal housing makes it a sturdy GC for online analysis in process control even in rough environments. 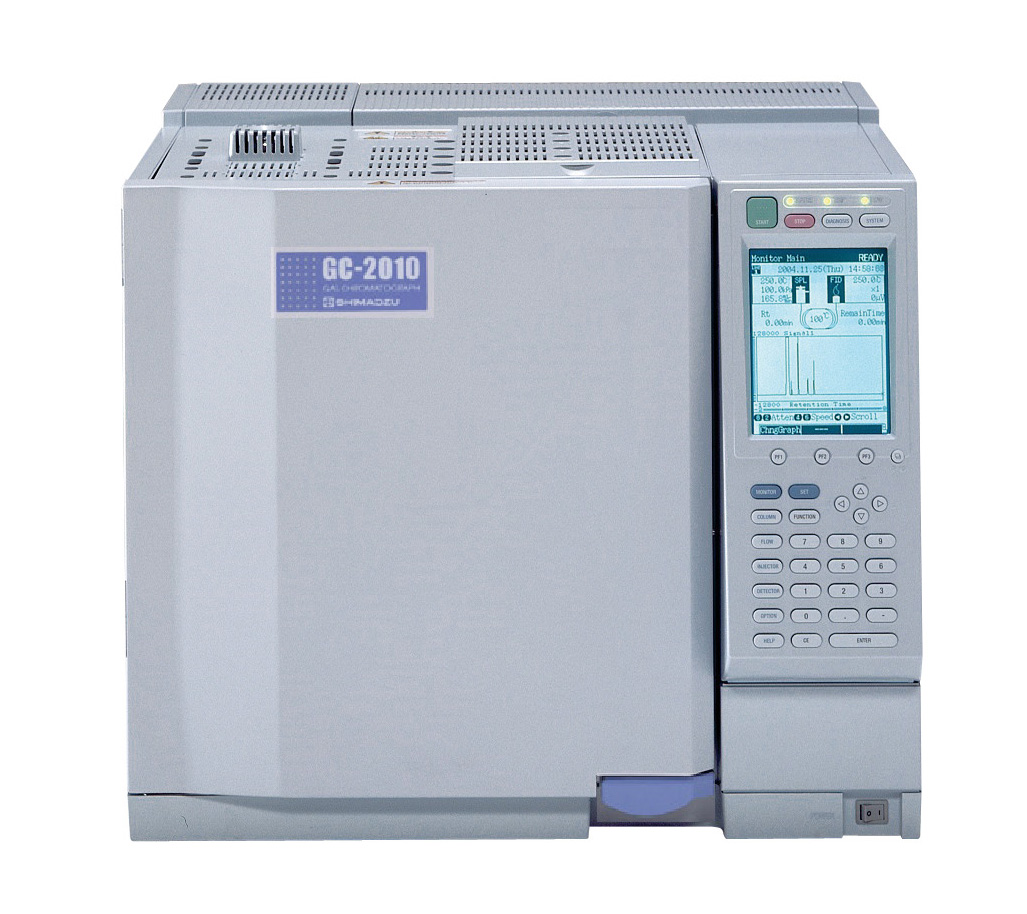 Many improvements and innovations made the GC-2010 a trendsetter for excellence in precision and sensitivity. Efficiency in form of high sample throughput or just faster answers to analytical questions is supported by dual line and full ability for Fast-GC operation. Fast responding GC detectors are developed for acquisition of sharp signals generated by high-resolution chromatography. First time the optimum adjustment of detector response is possible by fine adjustment of Sampling Frequency as well as Filter Time Constant. 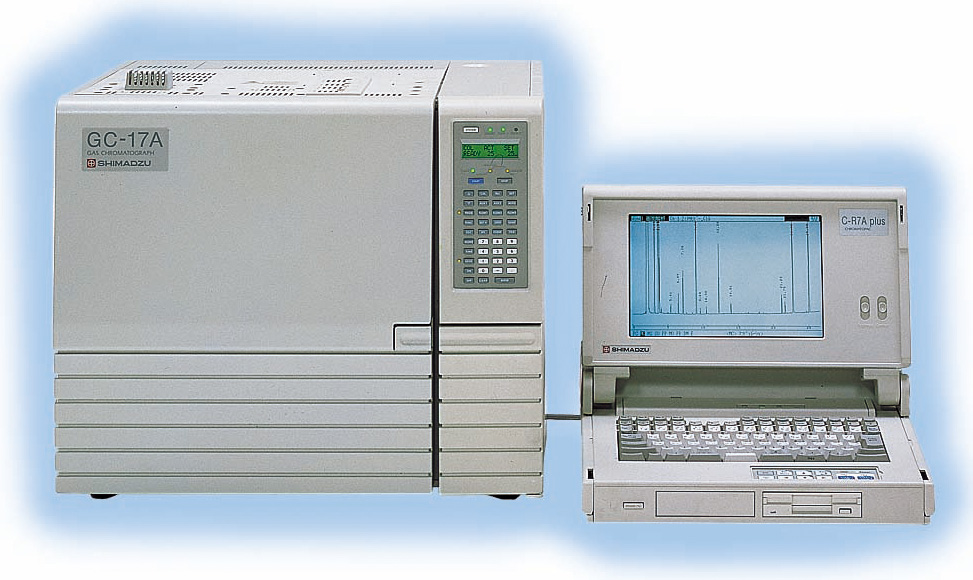 The outstanding separation opportunities offered by capillary columns have been supported by two major GC innovations: Shimadzu’s Advanced Flow Control (AFC) in combination with Electronic Pneumatics Control (EPC, Hewlett Packard Enterprise, now Agilent Technologies). Pressure and split flow are electronically controlled and can be adapted on the oven temperature program. According to the Van Deemter equation, a constant average linear velocity is maintained over the capillary column for best chromatographic resolution. 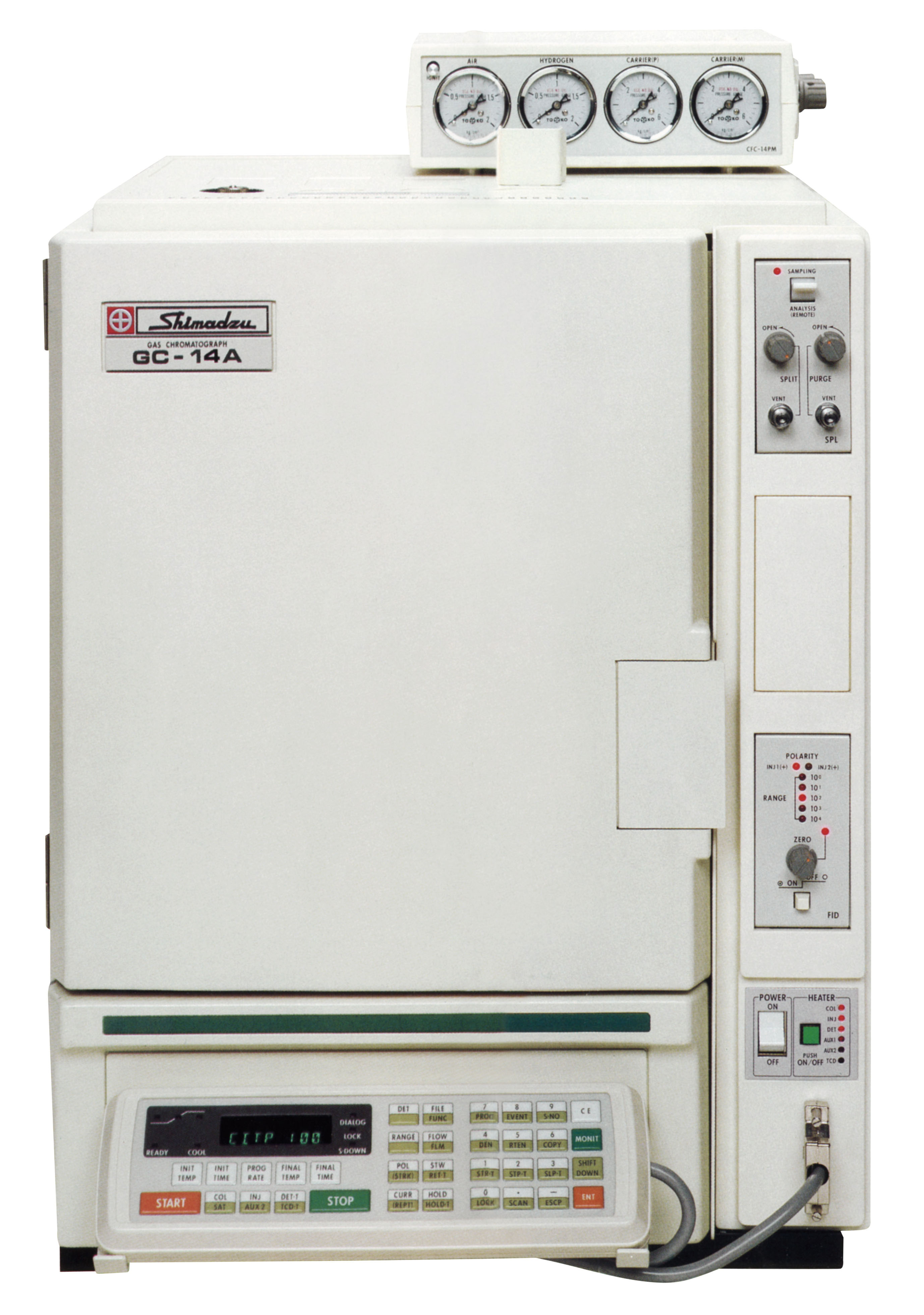 With GC-14B Shimadzu continued the development towards capillary column operation. New designed detectors in combination with capillary columns achieve better sensitivity and chromatographic resolution. High temperature chromatography extends the application range for GC and allows faster measurements. Flexible usage of different injection and detection techniques on one gas chromatograph is another development topic of GC-14. Injectors and detectors become modular and are easy exchanged. Equipped with several injectors and detectors many applications are covered by one GC system. 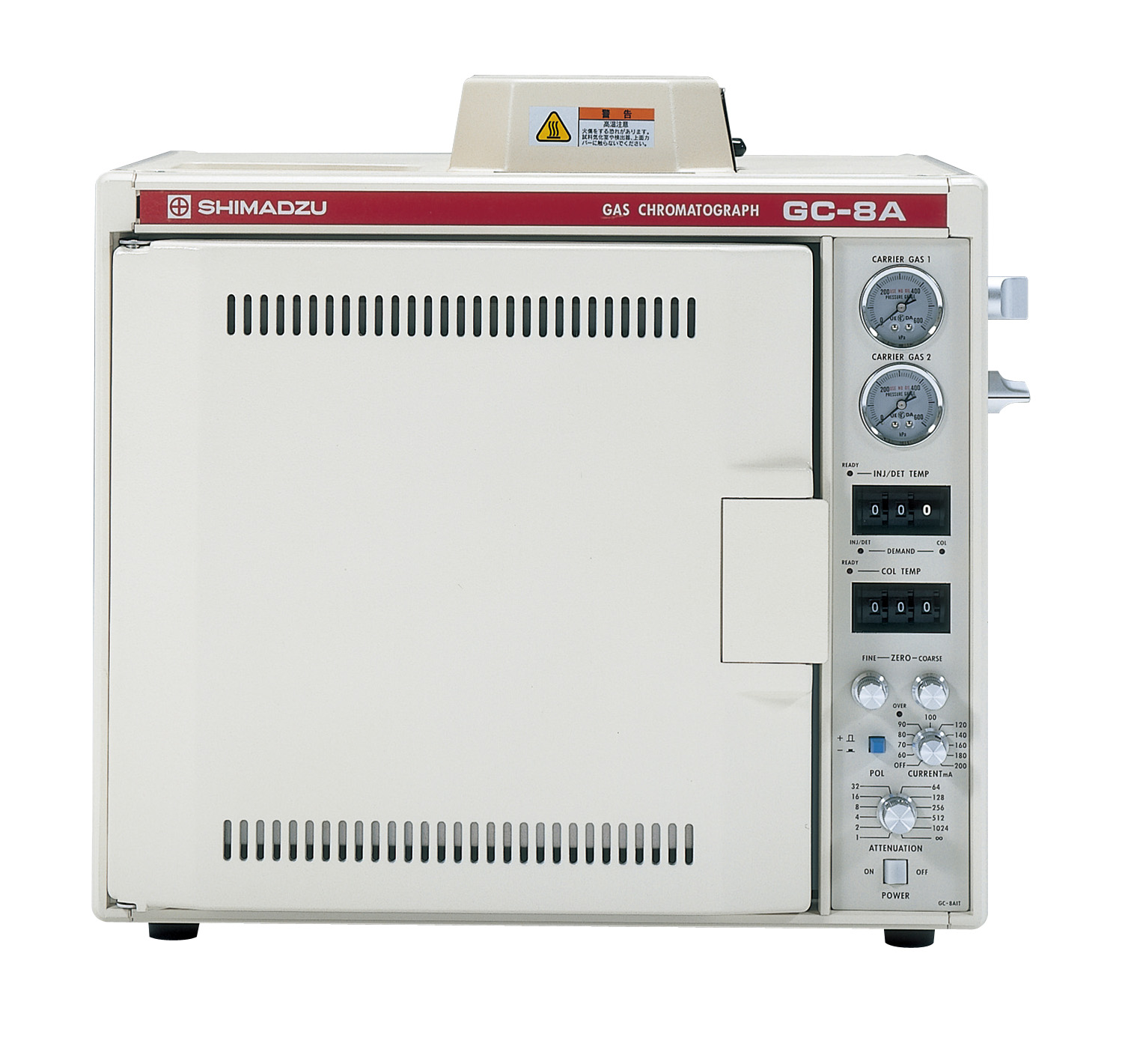 In GC-8A Shimadzu replaces the suspicious asbestos by less dangerous isolation materials. Besides GC-8A is one of the smallest, GC Shimadzu ever manufactured and the combination between performance and small footprint made it a popular GC over several decades. Automatic analysis of liquid samples in a sequence becomes possible with the auto sampler AOC-8A. Additionally the integrator C-R4A take up GC control functionalities – another step towards GC automation. 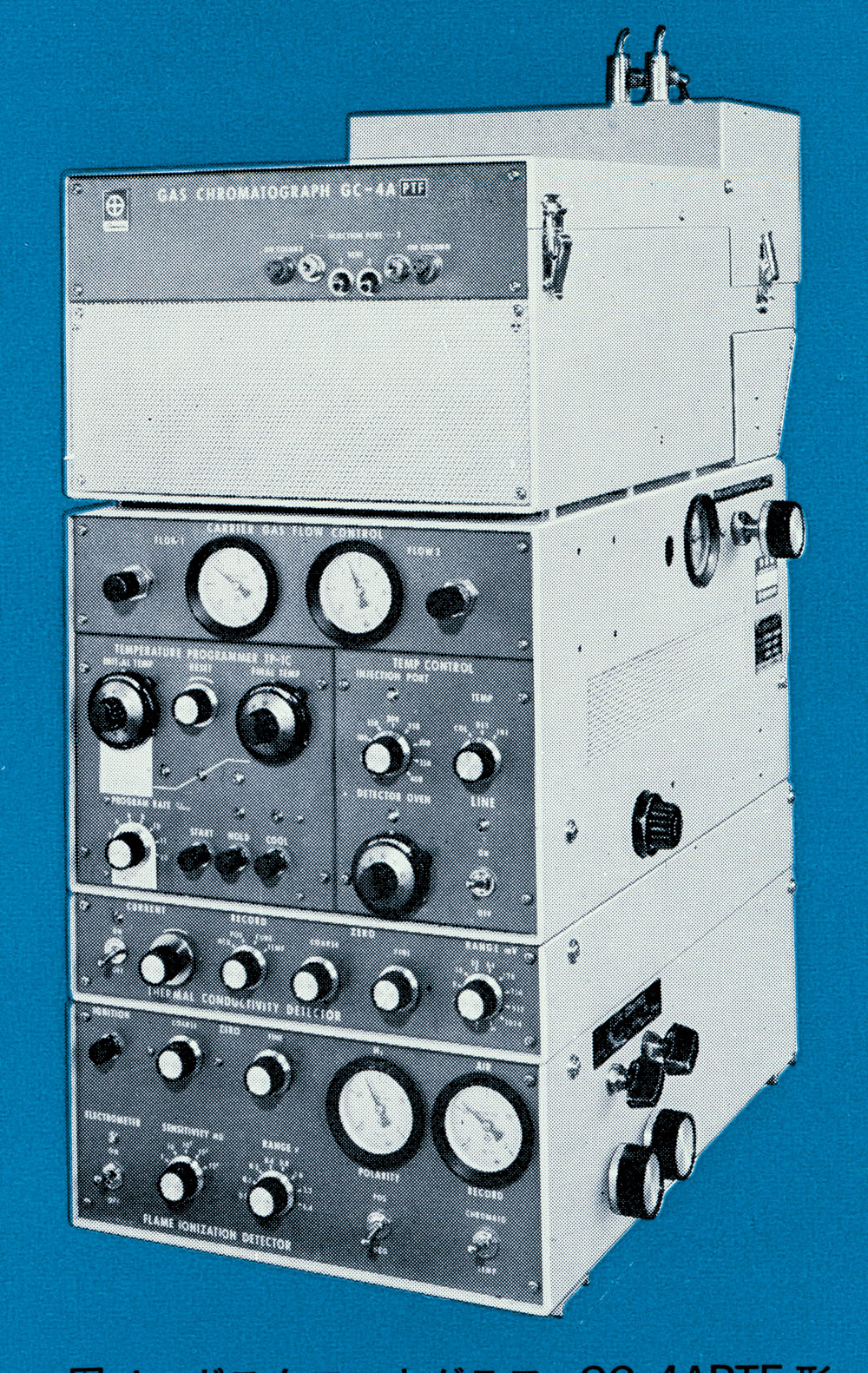 Temperature programmable gas chromatography in combination with a fast cooling oven allows separation of complex samples in shorter time with better resolution. Another efficiency improvement is the patented dual-flow operation of two packed columns. Changes of column flow during the run of an oven temperature program are compensated by utilization of mass flow controllers. Additionally the integrator, C-1A supports the automated integration of gas chromatographic peaks and therefore evaluation of chromatograms. 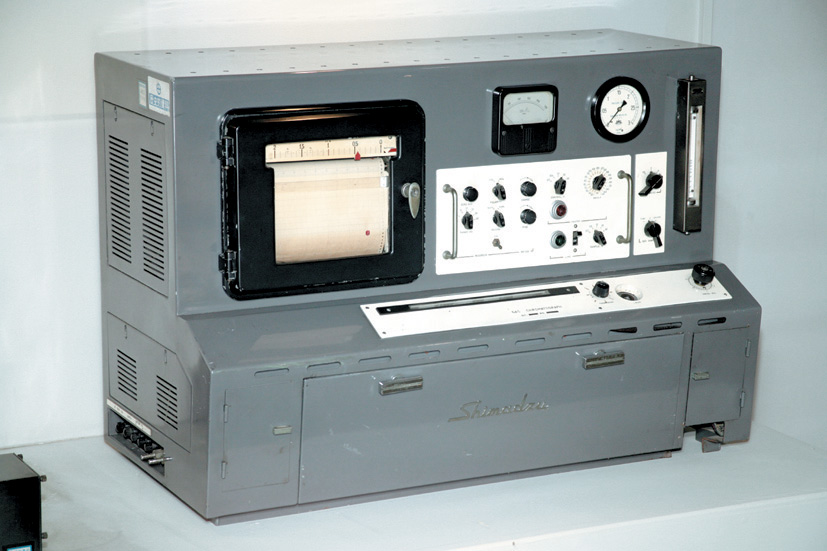 Just four years after invention of the fundamental technique in 1952 Shimadzu developed the first gas chromatograph, which led to series production of GC-1A in 1957. Chromatograms were plotted by an integrated xy-recorder. With 120 kg GC-1A was a giant compared to much smaller more powerful and more versatile GC instruments that followed over more than half a century. It started a unique development process that has not yet finished.